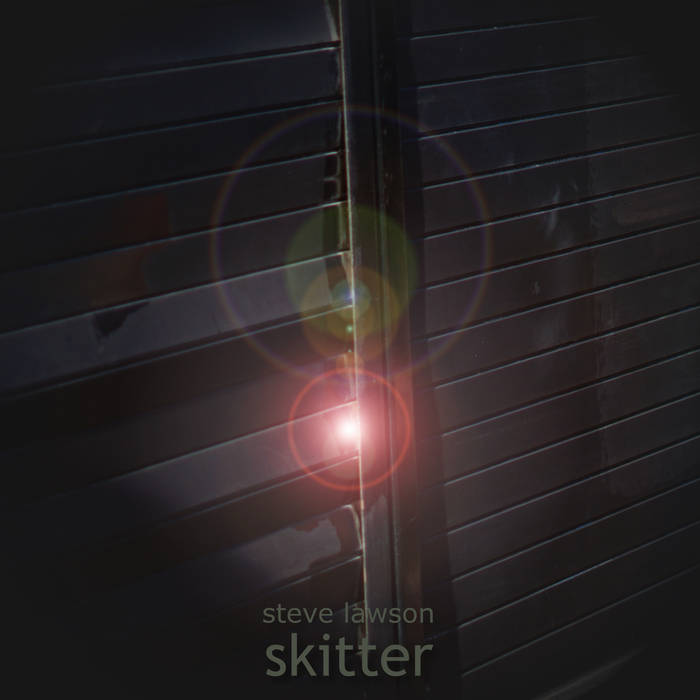 darren goddard my current emtional state is not exactly bad at the moment but better described as brittle or fragile. an array of voices, some loud and aggressive, others still and small crowd in demanding their pound of flesh. so, on this day and in this present state, 'skitter' captures audibly what my words fail to do: all these voices underscored with an itch that cannot be scratched is perfect. with thanks and with love.

Here's an interesting one. I modified my current pedal board to allow a greater degree of abstraction in terms of drum sounds and processing - a bunch of weird delays and granular stuff that produces this quite uneasy, neurotic, skittering feeling that I guess was what I was looking for... So that's on here. Thing is, it's on here all the way through, as the track builds from abstract electronic noise (all bass - mostly messing around with a ring modulator pedal from SubDecay) to a much more mellow chords + solo vibe towards the end. The one constant is the incessant nagging unease of the drum track... I'm still not certain if it's too much of if it's the entire point of the track - that this constant gets recontextualised every time the stuff being improvised over the top morphs into something else... It's always true that whatever happens happens in response to what's already happening, so it's definitely the thing that I thought should happen in the moment. But hindsight is a wonderful thing, eh? Even better is subscriber insight, so feel free to let me know what you think!

I nearly added this to Cabinet Of Curiosities. It sort of fits, but that album is already long enough, and another 11 minutes of stuff felt like overkill... but feel free to insert it into that particular track order if you download these things rather than playing them from the file player. I'm always fascinated by how you order things here - I know a lot of you put a whole load of it on shuffle in iTunes (seems like a great way to get to know such an overwhelmingly large catalogue of music!) and some of you listen to albums in their entirety via the website or the app... Whatever works for you is absolutely fine by me!

Anyway, I hope you enjoy it. I think this rather effectively bridges old-world Steveness with new Steveness, and aside from the processed bits, the drum part will be, for some of you, refreshingly devoid of wonky drunken misplaced beats 😂

...also, as usual, this may be the start of a new collection, so perhaps other tracks will appear here over the next few days! But perhaps not...

[EDIT]
...and indeed, as if by magic, there are new tracks appearing! The middle one is a bit of a palette cleanser between two tracks that are in someways very similar (not far off in tempo, same drum sounds, fairly straight ahead incessant 4/4 beat) and in others very different. Certainly the emotional content sits in a very different place even while employing some similar sounds... I hope that the similarities are heard as continuity rather than samey-ness and the differences give it enough interest across the length of the recording. As always, let me know what you think!