by Steve Lawson and Poppy Porter 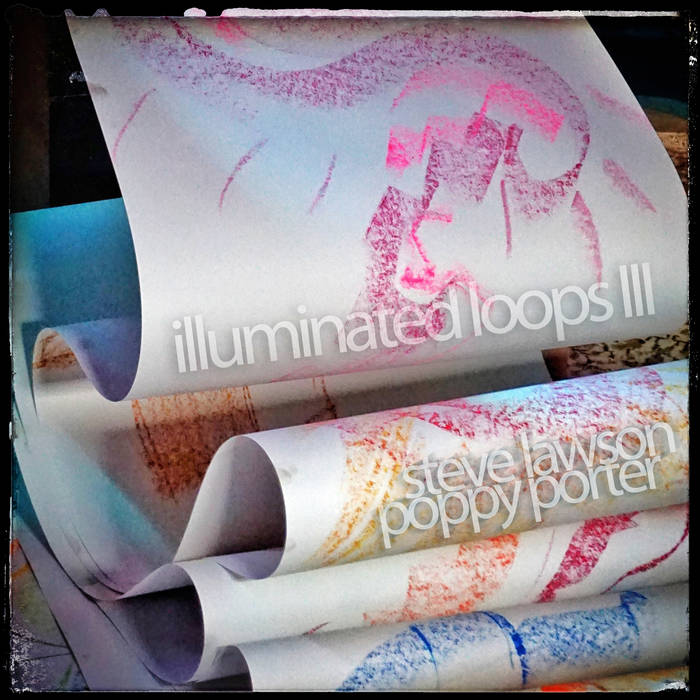 GHajba Illuminated Loops is one of the great concepts I have ever seen. Drawing the music and then using the drawing as a score to play music.
the result is incredible.

This is the third act from my 20th Anniversary Gig on December 15th, and the third Illuminated Loops release. When Poppy came up with the name for the project, I liked it straight away, but in the intervening years, creating music and art in this format a number of times, the ways in which we 'loop' back on each other's work has become so much more integrated and subtle. The methods by which I interpret Poppy's drawings as a graphic score for the latter work have become more evolved, and - by her own admission - she now has a stronger sense of what certain sounds and patterns of mine look like, so the selection process, in terms of what from the complex three dimensional moving image she chooses to draw, has become more informed and less frantic...

This show was preceded and followed (acts 1 and 4) but audience discussions about expectation and experience - the expectation discussion included relatively little about the Illuminated Loops set, but act 4 was dominated by audience members making sense of how they enjoyed, interpreted and extracted meaning from our interactions. It's a hugely complex evolving, unfolding set of interactions, that can be read on so many levels by the audience, and the art can make the music mean so many different things - in this case, the music was the dark and the art was the light. Listening back to the recording, it sounds WAY darker and more ominous than it did to me in the moment, because Poppy's drawings were adding a whole layer of representation and meaning that didn't get lost in that darkness, but there's also the amazing sense that this 'art project' gives us both room to follow the muse wherever it goes, which results in music with far fewer obvious anchors in idiom... I mean, there are still sounds and beats that are clearly me, and blues-based melodies, moments of jazz in the harmonic superimpositions, and some wonky DJ Krush-ish complexity in the layering of clashing unresolved rhythms. But in the moment, it was all about what it was then transformed into by Poppy. What do these sounds LOOK like??

For the people who were there, this will serve as something of a reminder, though the absence of the sound of Poppy's pastels on paper takes it out of its physical space and the memories that were located there. So perhaps we'll get to see how much of the meaning is in the music, and how much in the transaction between sound and vision, in the unfolding of the conversation, where everything is consequential...